An historic cottage was today facing demolition after a £55,000 Audi smashed into the living room.

Andy, 46, and Karen Rattray, 44, were out at the time of the crash at their home in Over Peover, Cheshire, which saw the car go into a 600-year-old oak-framed wattle and daub section of the home.

The Audi RS4 driver was going along the A50 towards Knutsford just before 9.40am on Monday, when a Volkswagen appeared to be travelling on the wrong side of the road in the opposite direction. 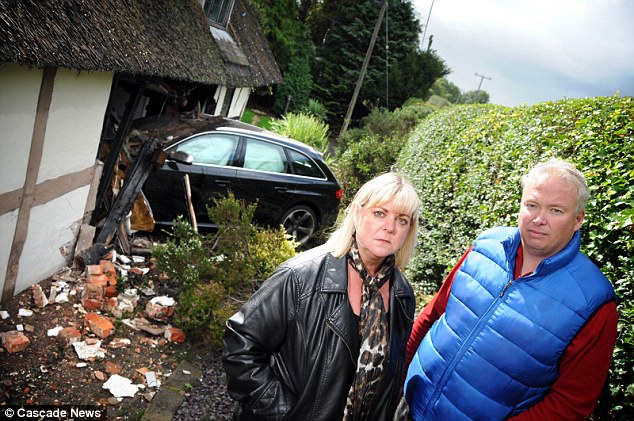 Damage: Andy, 46, and Karen Rattray, 44, were out at the time of the crash in Over Peover, Cheshire 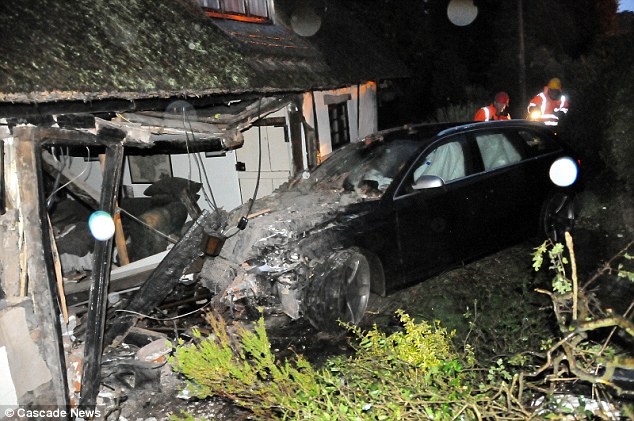 Smashed: The Audi car went into a 600-year-old oak-framed wattle and daub section of the living room 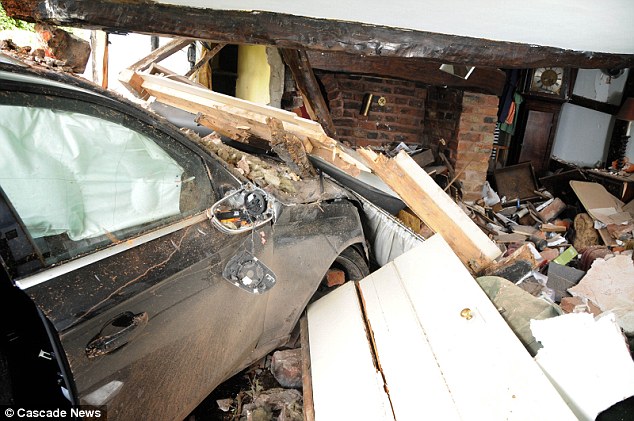 No injuries: The driver of the Audi - worth £55,000 - and the couple's three cocker spaniels were unhurt 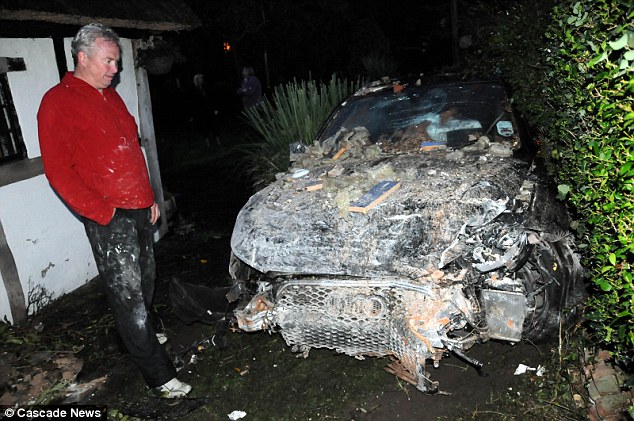 Long wait: Mr Rattray said it will be up to 12 months before the couple can go back into their cottage home 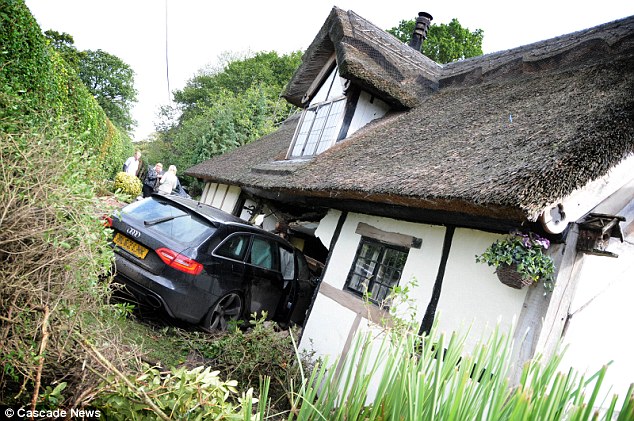 Inspection: Structural engineers attended to assess the damage before the Audi car could be removed 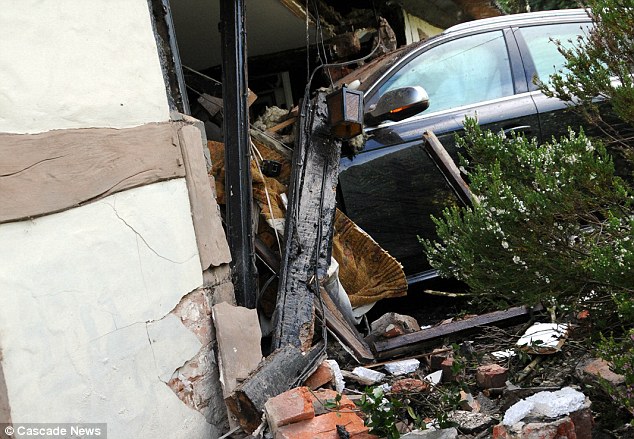 Somewhere to stay: Mrs Rattray said the driver 'gets to go home to his nice warm house and we don't'

Cheshire Constabulary officers said the Audi driver took evasive action, mounting the grass verge before going across the road, through the hedge and coming to a halt in the lounge of the building.

The driver of the 2012 Audi and the couple’s three cocker spaniels - who were inside the house - were unhurt.

The couple's living room is completely destroyed however, along with several antiques including a grandfather clock which Mr Rattray said is still standing but beyond repair

Police are now trying to trace the driver of the Volkswagen, which was a dark blue car.

Mrs Rattray said: ‘This is the third time we have had a car come through the hedge but this is by far the worst - we live in fear. Thank God we weren’t in.

WHAT IS WATTLE AND DAUB?

The method of constructing buildings using the wattle and daub technique dates back to the Neolithic period and is thought to have helped develop later methods of construction including lath and plaster and even cob.

Wattle and daub was used in parts of central Europe, western Asia, and north and south America.

It involves woven lattice strips of wood, called the wattle, being daubed with a sticky paste to hold it together.

The paste was traditionally made from materials at hand, including animal dung and straw or mud and clay.

‘If we were we would have all been in the lounge and we had a great big unit in front of the window. That’s obliterated and there are bricks embedded in the wall.

‘We have to find somewhere to stay now and that’s hard with three dogs. The driver gets to go home to his nice warm house and we don’t.’

Fortunately for the couple and their dogs, a local farmer has offered to rent them a house while work continues on theirs.

Structural engineers attended the scene to assess the damage before the car could be removed.

Mr Rattray said: ‘It is going to be six to 12 months before we can go back in - we don’t know yet if the house will have to be knocked down.

‘We heard a noise the night before and my dogs had been going mad. We thought a car had gone through the hedge so I went to look the morning after and there was a hole in it.

‘I got there and just saw this car sticking out of the hedge and the driver was just stood there looking very pale and shaken. I thought it had happened the night before but it had happened literally a few minutes before.’

Whatever happens to the old house, Mr Rattray may have a job on his hands persuading his wife to move back to the property. 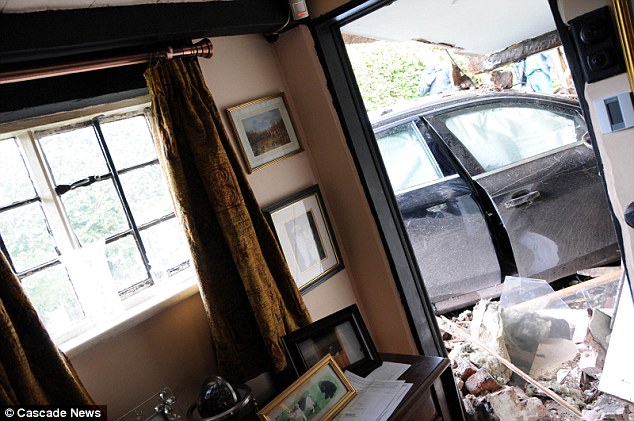 Historic: The part of the Cheshire cottage that the Audi car went into is an astonishing 550 to 600 years old

Evasive action: Cheshire Constabulary officers said the Audi driver mounted the grass verge before going across the road, through the hedge and coming to a halt in the lounge of the building 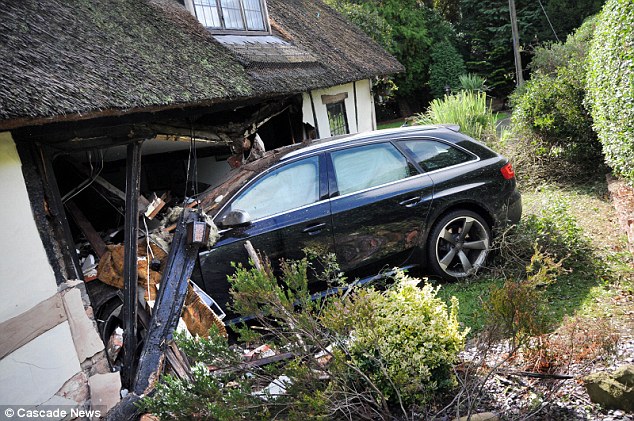 Crash: Mrs Rattray said it was the third time the couple have had a car come through the hedge in Cheshire

Shock: Mr Rattray (left) said he 'just saw this car sticking out of the hedge' next to the property in Cheshire 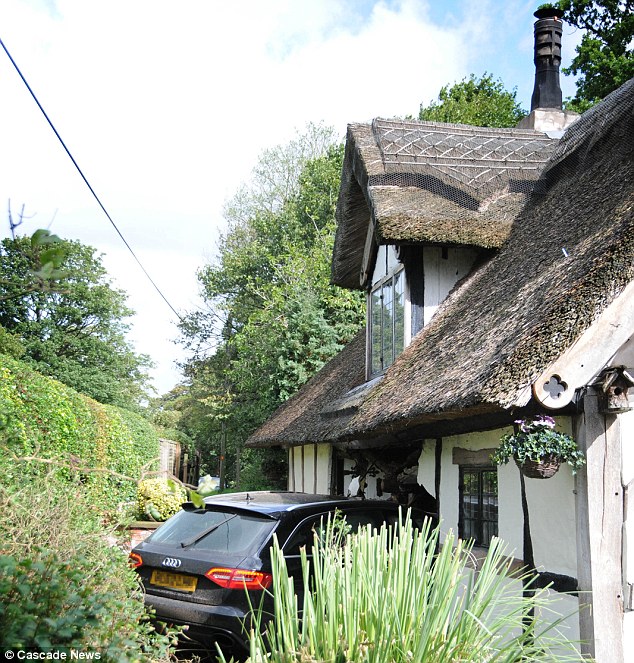 Accident: The Audi RS4 was driving along the A50 towards Knutsford at around 9.40am on Monday 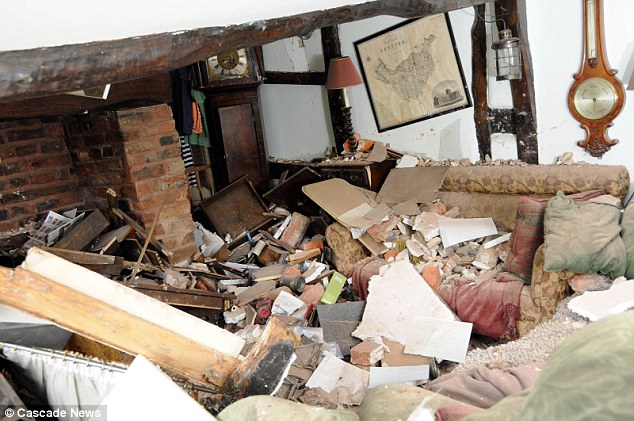 Carnage: The cottage was an absolute mess following the crash which took place on Monday morning

Worry: Mr Rattray said the couple were unsure as to whether the house will have to be knocked dow

He told MailOnline: 'If the building has to be knocked down, it would be nice to rebuild further back from the road as it's a lovely area.

'But my wife is afraid to live here again, so I don't know if we'll return.'

Mr Rattray described the dangerous stretch of road as 'crazy' with several motorists killed in crashes since he moved in to the house 14 years ago.

He said that the road is particularly busy when the motorway is closed and large lorries use the route as a diversion.

'A truck would have gone straight through the house,' he said.

The last serious incident on the road before the Audi crash saw an 18-year-old girl killed in a crash close to Mr Rattray's home.

The house came close to suffering serious damage last year when another car came over the hedgerow.

Mr Rattray said: 'It came through the hedge upside down and it was going to hit the property, but fortunately we had a car parked there and it hit that and was pushed along the side of the house instead.'

The technique of wattle and daub dates back 6,000 years. Wattling is the building of walls by weaving sticks in and out of upright posts - and daubing is the weather-proofing with manure, earth and clay.

The house, known as Nixon's Cottage is thought to have been home to local prophet Robert Nixon.

Born in the 15th century, he became known as the Cheshire Ploughboy Prophet and is said to have predicted the Battle of St Albans and the outcome of the Battle of Bosworth field.

He is even said to have foretold his own death. Nixon was summoned to the court of Richard III but refused to go saying that he would be 'clemmed' - or starved - to death.

King Richard ordered that he be keep in the court's kitchens but he was caught stealing food from the pantries and locked in a cupboard by the cook.

No protection: The historic cottage is hidden behind a row of bushes, but it isn't enough to stop cars ploughing through it

Dangerous stretch: The Rattray's home is situated right next to the busy A50 road