Around 30 passengers hurt after bus overturns in Belfast 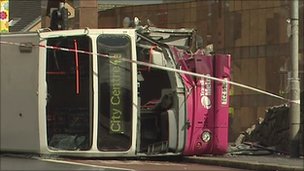 The bus mounted the kerb before overturning outside Central Station

Around 30 people, including two children and a pregnant woman, have been injured after a double-decker bus overturned close to Central Station near Belfast city centre.

Some passengers were put on spinal boards, but none of the injuries are serious.

It is understood that cutting equipment was used to free the driver from the bus who was badly injured.

"A double-decker bus travelling towards Belfast city centre mounted the kerb just outside Central Station and collapsed on its side," he said.

"The passengers to the best of our knowledge could be described as walking wounded. They have been taken to four hospitals in the city.

"The driver was a bit more seriously injured. He had to be cut from the cab and has been taken to the Royal Victoria Hospital."

John McPoland from the Northern Ireland Ambulance Service said more than 20 of its personnel attended the scene and treated passengers for cuts, bruises and sprains.

Two children were transported to the Royal Belfast Hospital for Sick Children and a pregnant woman was brought to the maternity unit at the Ulster Hospital in Dundonald.

Neil Green works in the Santander building opposite the station.

"We all went to look out of the window because there was such a loud bang," he said.

"The police cordoned off the area and we could not get out of the side alley to our building.

"Looking out of the window at it now, I can see that the emergency windows are open where people were evacuated. The front of the bus looks really badly mangled."